What Do Shrimp Eat? How to Feed Freshwater Shrimp (The Right Way) 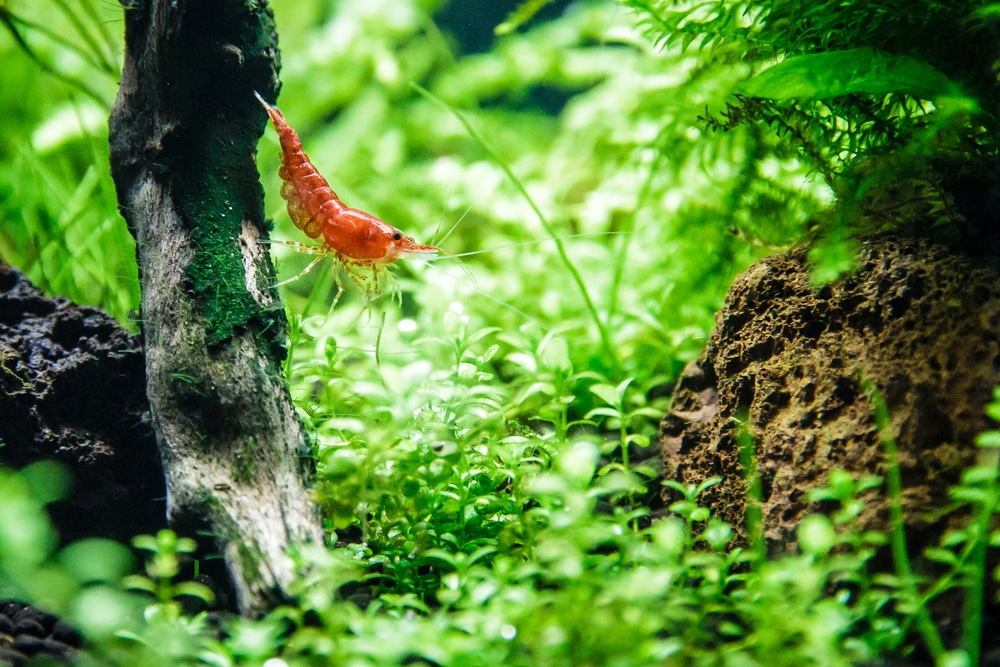 Fish (and humans) do love to eat shrimp. But what do shrimp eat? As it turns out, quite a lot of things! Like their other crustacean cousins, shrimp will eat nearly anything they can get ahold of. But some shrimp are much pickier eaters than others. Let’s get to know shrimp and their meal habits below!

What Do Shrimp Eat?

Shrimp occupy the scavenger niche of the aquatic food chain. That is to say, they are like the roaches of the underwater world. Remember that the next time you’re staring down a tasty plate of scampi or prawns!

Shrimp eat literally any kind of organic matter they can but prefer mostly animal protein, algae, and decaying vegetable matter. This makes them omnivores; creatures that eat both plant and animal fare.

Different shrimp have different preferences but the majority are entirely omnivorous. However many are specialized for very particular diets.

Some shrimp species are famous for being cleaners of fish, particularly saltwater cleaner shrimp. Cleaner shrimp perch themselves on rock or coral outcroppings. You would think this would make them easy meals for passing fish.

Instead, they wave their antennae enticingly for passing fish to notice. Once a fish stops the shrimp then climbs right onto them and begins picking away at loose scales, dead skin, and parasites. They even climb into the wide open mouths of toothy predators to scrub between their teeth!

Most shrimp have to be content with tiny prey items and the leftovers of bigger predators. Their claws are too tiny to get a good hold on animals that can fight back.

This makes shrimp the safest crustaceans to keep with small fish. Crayfish, crabs, and lobsters have heavier claws and stronger shells. They are much more willing to latch onto a small fish and begin eating.

However, a few freshwater prawns do have fairly large claws and heavier bodies. These tend to be Asian species of the genus Macrobrachium. Many can grow anywhere from 4-8 inches long.

While they are too slow and delicate to catch fast moving fish during the day at night they have a much easier time. Freshwater prawns can also be given blanched vegetables, earthworms, and other meaty fare to keep them well fed and non-aggressive.

Other shrimp tend to be less bold in their dining habits. Amano and Red Cherry Shrimp, two of the most popular freshwater species, eat mostly biofilms and algae. Biofilms are the coatings of micro organisms that develop on nearly any hard surface underwater.

You might be familiar with brown algae. This diatomaceous growth forms a thin brown coating over everything, even the glass. Unfortunately, shrimp don’t find it tasty.

When keeping biofilm feeders, live plants, rocks, and driftwood tend to produce the healthiest biofilm “crops.” Especially when given plenty of light and slow currents. So don’t be too tidy when keeping shrimp, unless you intend on providing supplemental food.

Unfortunately, shrimp are so willing to eat just about anything that they may end up eating each other on occasion! Like all arthropods (crabs, lobsters, insects, spiders, centipedes, etc), shrimp need to molt on occasion.

Unlike us vertebrates, shrimp skeletons are external. While they are rigid, like armor, they can’t grow along with the insides of the shrimp. Once shrimp molt, they can continue to grow but they are vulnerable for a few hours until the new shell hardens.

Soft and vulnerable, sometimes other shrimp may decide to pounce on their defenseless neighbor! Crayfish, crabs, and lobsters are especially willing to be cannibals as they have heavier claws that do more damage.

Still, a larger shrimp coming upon a newly molted, smaller cousin will gladly make a meal out of it if the shrimp is hungry enough.

Bamboo and vampire shrimp are special cases. Unlike most shrimp, they aren’t scavengers of biofilms or cleaners. Instead, they use specialized limbs full of bristles to filter out floating particles of food.

Plankton, crushed flakes, and live or frozen items like baby brine shrimp and daphnia are all happily accepted by these specialized shrimp. Often you’ll see them standing on plants or driftwood, aligned with the filter outflow.

Bamboo shrimp may even wrestle with one another over the best spot in the current, hoping to get lucky and snare some passing food. Vampire shrimp, on the other hand, aren’t especially social and are mostly nocturnal. But at night, you’ll still see them busily filtering the water for bits of floating food.

Both bamboo and vampire shrimp will still accept sinking pellets, flakes, and other items. But if you want to see them perform their natural behavior, try adding food directly to the water current instead!

Best Shrimp Food That We Recommend

Here are a few of our favorite shrimp foods:

Shrimp love plant matter but living plants are often too tough or bitter to be of much interest to them. Instead, take some frozen or chopped vegetables and parboil them for 5-10 minutes. This softens them up.

Terrestrial vegetables like zucchini, spinach, okra, and squash are all perfect. You want to choose vegetables that will get soft with a light boiling.

Once prepared (avoid seasoning), attach your vegetables to a feeding clip and place it near the bottom of the aquarium. Eventually, you’ll find your shrimp gravitating towards it to graze. If you have enough shrimp they may even consume the entire offering in a single day!

Omnivorous shrimp are extremely cosmopolitan when it comes to eating. If it’s organic they will eat it! Standard fish flakes and pellets are quickly snatched up. But if you’re keeping specialty shrimp species like Bee Shrimp or some of the Sulawesi species, you may want to use a formula designed specifically for them.


These shrimp are quite sensitive and need both precise water conditions and a diet that provides them the micronutrients they need to keep their shells strong and growth constant.

Prepared shrimp food also contains a wide assortment of protein sources, from algae to fish meal. This ensures that these omnivores get the diversity they need!

Shrimp also love raw animal protein! Frozen foods like brine shrimp, bloodworms, and daphnia will all be greedily snatched up. You may even see your shrimp swimming around to try and find floating food once they catch the scent with their antennae.

Live foods like tubifex and blackworms may be a bit more difficult. Shrimp tend to focus on one worm at a time, allowing the others to escape. A worm may also be too much for the tiniest of shrimp.

Still, as long as you don’t mind them colonizing your gravel or you have more fish to eat them, it’s not an issue if a few escape!

While they may look delicate, shrimp are problem-free when it comes to eating! So long as it came from either a plant or an animal, they will likely eat it. Just do your research before purchasing a new shrimp species as a few may have dietary needs you’ll find challenging!